Did you just find a Lone Star Tick on yourself or a loved one? TickCheck can test your tick and determine whether it carries the bacteria that transmit Erhlichiosis and other tick-borne infections.
Test My Lone Star Tick Now

The lone star tick is a commonly tick found in forested areas ranging from the midwest to the east coast of the United States.

Visually, lone star ticks are easy to recognize because of a conspicuous white dot on the dorsal shield of the females, which gives this tick its name. Adults are reddish-brown in color, very round, and have prominent festoons.

Two of the most common diseases transmitted by lone star ticks are Erhlichiosis and Tularemia, both of which are tested for by the TickCheck lab. Research has shown that while lone star ticks can carry the bacteria that causes Lyme disease, it is unlikely to transmit this disease to a host.

Additionally, Scientists have recently confirmed multiple cases in which bites from a Lone Star tick appear to have caused Alpha-Gal syndrome, an allergic reaction to meat. The allergy is thought to be caused by the immune system's response to molecules found in the saliva of Lone Star ticks that have previously fed on a mammal.

Lone star ticks have similar life cycles and habitats as most other major tick species. They are known to feed on large mammals, such as deer, and also on many species of birds. They are observed to be the most aggresive of known tick species. 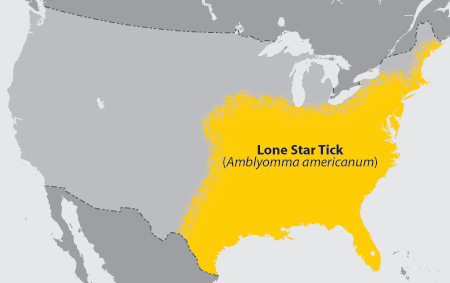 The lone star tick is medium-sized, with a very round body, reddish-brown color, and long thin mouthparts. The most easily identifiable characteristic is an obvious white dot on the female's dorsal shield, which gives the tick species its name.

Location: Most common in the southeastern United States, but have been spreading as far north as Maine