Did you just find a Dog Tick on yourself or a loved one? TickCheck can test your tick and determine whether it carries the bacteria that transmit Rocky Mountain Spotted Fever and other tick-borne infections.
Test My Dog Tick Now

The brown dog tick can be found throughout the entire world. It is endemic throughout the United States, but is most often seen in warmer southern areas. It is capable of transmitting the causative agents of Rocky Mountain spotted fever and possibly Erhlichiosis. Though their primary hosts are dogs, they will feed on other mammals including humans.

Brown dog ticks can be identified by their reddish coloration and small size. The dorsal shield is undecorated and the mouthparts are short and hexagonal, similar to the American dog tick.

A special feature of the brown dog tick is that its life cycle does not follow the seasonal pattern as that of most other ticks. Brown dog ticks are capable of reproducing at any time of the year and are often active during all four seasons. They are known to infest homes, where they can continuously breed and quickly become a major pest control concern.

Brown dog tick populations can grow very quickly, especially in kennels or houses with multiple pets. It is important to deal with an infestation of ticks as soon as possible, to avoid tick bites and potential infection.

The bacteria often carried by brown dog ticks can cause several diseases in domestic dogs, including canine ehrlichiosis (Ehrlichia canis) and canine babesiosis (Babesia canis). Worldwide, the dog tick is known as one of the most dangerous disease vectors for dogs. 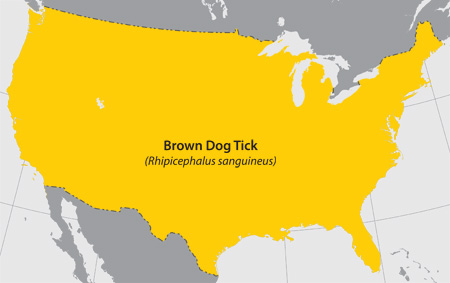 Above: Geographical distribution of the brown dog tick

The brown dog tick is small, with an elongated body, reddish-brown color, and hexagonal mouthparts. Unlike the American dog tick, the brown dog tick does not have a decorated dorsal shield. Most commonly feeds on dogs, but can also infect humans.

Location: Found year-round across the entire United States, but most often seen in southern areas